Parking is available at Kinder Farm (fee to enter park will not be collected for registered participants).

Packet Pick-Up Information: Friday, November 15th, 5-7PM, 400 Benfield Rd., Severna Park (located behind Our Shepherd Lutheran Church) You may also pickup your packet the morning of the race, but remember to arrive early to allow time.

Register for the race here:  https://www.active.com/millersville-md/running/distance-running-races/stride-for-span-2019?int= 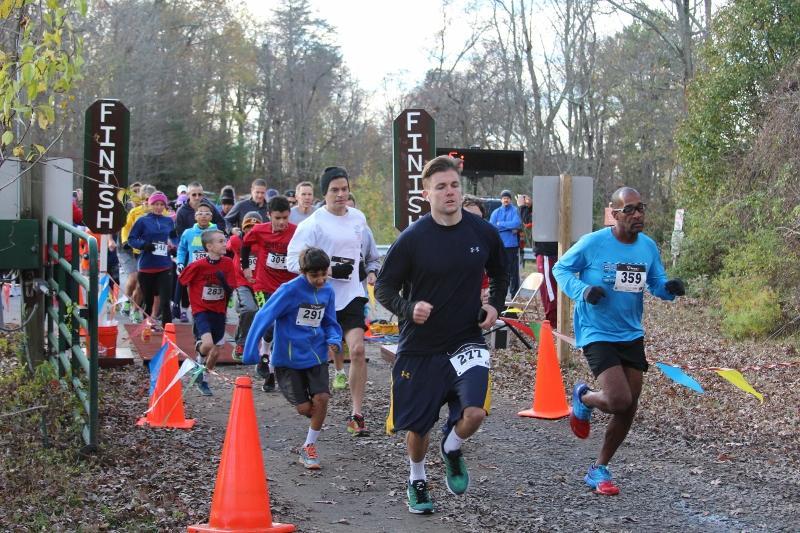 Broadway Goes to the Movies at Holy Grounds

A fundraiser for SPAN

In a first-of-its kind fundraiser, Severna Park native Laurette Hankins-O'Connell presents a cabaret show, Broadway Goes to the Movies, a whimsical and occasionally irreverent salute to movie musicals. Enjoy many of your favorite show tunes, while getting the scoop on how some of the best-loved Broadway musicals of all time traveled the bumpy road from The Big Apple to Hollywood. Hankins-O'Connell will be accompanied by pianist Anita O'Connor.
One-hundred percent of the proceeds of this show will be donated to SPAN - Hankins-O'Connell and O'Connor are both donating their time and talent. Tickets will be $20 each, all ages, and seating will be general admission. All money raised will be used to help local families in need with eviction prevention, utility turnoffs and medical/prescription costs.

Tickets, $20 each, must be purchased in advance through PayPal to [email protected], (Pay by PayPal). If you prefer, you may mail a check to SPAN, 400 Benfield Rd., Severna Park, MD 21146, or deliver a check in person during office hours, Monday - Thursday, 10-2.

Concessions and wine will be available for cash-only purchase. Silent auction baskets will also be offered. 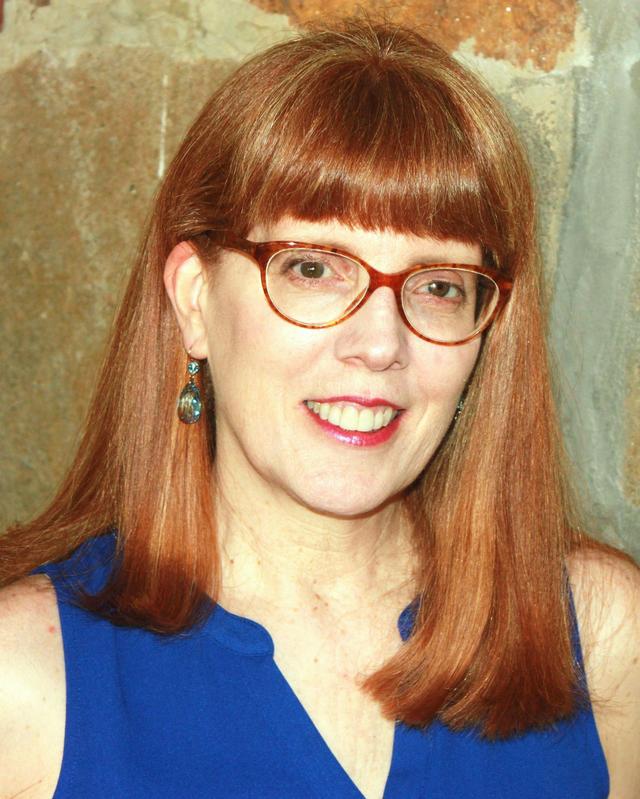 The majority of Laurette Hankins-O’Connell’s performing experience is in musical theater. Her first roles were at Duke University as Petra in A Little Night Music, Bonnie in Applause and Joanne in Company; she then played Gypsy Rose Lee in Annapolis Summer Garden Theater’s production of Gypsy.

Moving on to professional theater, she first appeared in two productions at the short-lived Heritage Equity Dinner Theater in Severna Park:  Marge MacDougal in Promises, Promises and Winnie Winslow in No, No Nanette. At the Lazy Susan Dinner Theater in Woodbridge, VA, she played Eliza Doolittle in My Fair Lady, Sally Bowles in Cabaret, Nancy in Oliver and Agnes Gooch in Mame. At the Wye Mills Summer Theater, she played Hope Langdon in Something’s Afoot, and Joan in Dames at Sea.

Laurette then moved to New York City, where she became a member of Actors Equity, AFTRA and SAG.  She performed in the Equity summer tour of The Student Prince, in the Equity Coachlight Theater’s production of South Pacific, and also worked in commercials, films and television.

Laurette was a featured soloist in the AFTRA Variety Showcase in New York City’s Nat Horne Theater (Off-off Broadway). Upon her return to Maryland, she was a featured soloist in two of Maryland Arts Festival’s Superstar Galas. In 2010 and 2011, she debuted her one-woman cabaret, It’s the Journey: Life a La Carte at Standing O Productions, and subsequently performed it at Germano’s in Little Italy. She debuted her Starstruck at the Stork cabaret at Germano’s and brought it back twice.   It was then her pleasure to debut  Musicals, Movies and Moxie—Oh My! , Broadway Goes to the Movies, as well as Broadway Divas & Dames and Broadway Goes Hollywood at Germano’s. She has also performed similar shows more than a dozen times at various local retirement communities, Ginger Cove, Brightview and Charlestown. She is delighted to be doing this special performance to benefit SPAN!

A graduate of Severna Park High School and Duke University, Laurette lives in Severna Park with her husband of 20 years, Kevin O’Connell, and their golden retriever Katie. For the past 11 years, her “day job” has been Associate Dean of Development and Alumni Relations for the University of Maryland School of Nursing.

Laurette dedicates tonight’s performance to her mother, Kathie Giddings Hankins, who was an active member of the Severna Park Community for more than 5 decades. In addition to receiving the ASPIRE award in 2009, and co-chairing SPOT (Severna Park Old Timers) with Scott Jay, her mother co-edited the historical accounting of the early days of Severna Park:  Severna Park Reflections: an album of Memories.

Anita O’Connor is originally from Pennsylvania and graduated with a degree in vocal performance from Syracuse University. She was Miss Pennsylvania in 1980 and went to the Miss America pageant the same year. Her favorite roles over the years in college and various theaters in PA and MD are Annie Oakley in Annie Get your Gun, Fanny Brice in Funny Girl, Sonja in They’re Playing our Song, Nancy in Oliver, Mame in Mame and Kate in Kiss Me Kate.
When she moved to Annapolis in 1993, she started music directing in the area. She has worked with the Annapolis Summer Garden Theater, Compass Rose Theater, Colonial Players, Children’s Theater of Annapolis, and for 10 years she was the music director with the Chesapeake Music Hall Dinner Theatre. Currently, Anita is a music teacher at Indian Creek School. She teaches fourth through eighth grades, and directs the middle school musical and the 5/6 musical. She also teaches drama from first through fourth grades. She and her husband Maurie have been married for 23 years and have two beautiful girls who are both in college at JMU.
Anita is delighted to be playing for Laurette,  and to be working with someone who enjoys Broadway music as much as she does!

Visit the newly remodeled Chuck E. Cheese in Glen Burnie  on Friday, April 5, and SPAN will get 20% of all purchases! 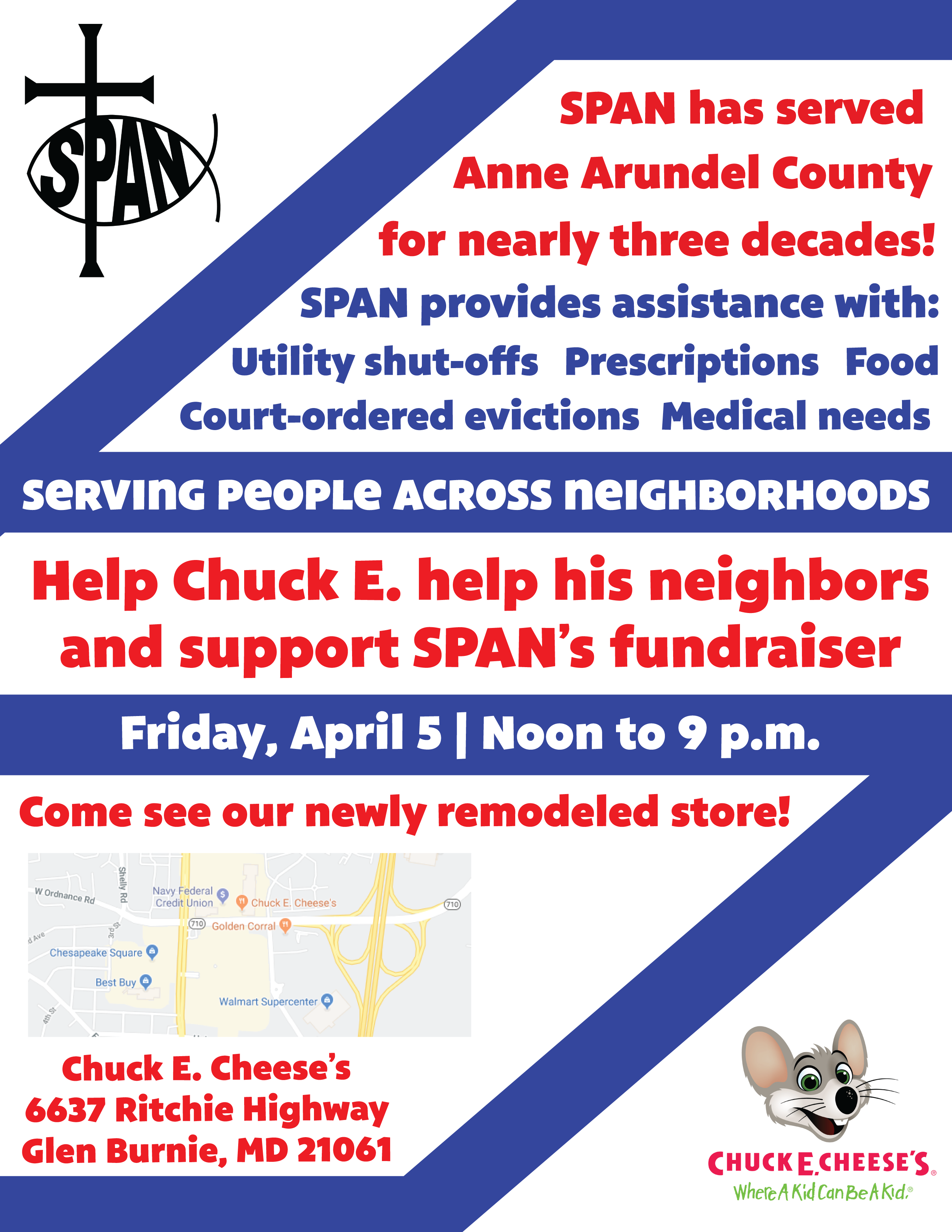 The Severna Park Holiday Tree Lighting in Park Plaza is happening Friday, Dec. 7! Santa and Ms. Claus will arrive at 6:00pm and will be available for visits and photos with the kids throughout the evening in HoneyBaked Ham. Bring a food donation or cash donation for SPAN in exchange for a free photo with Santa. 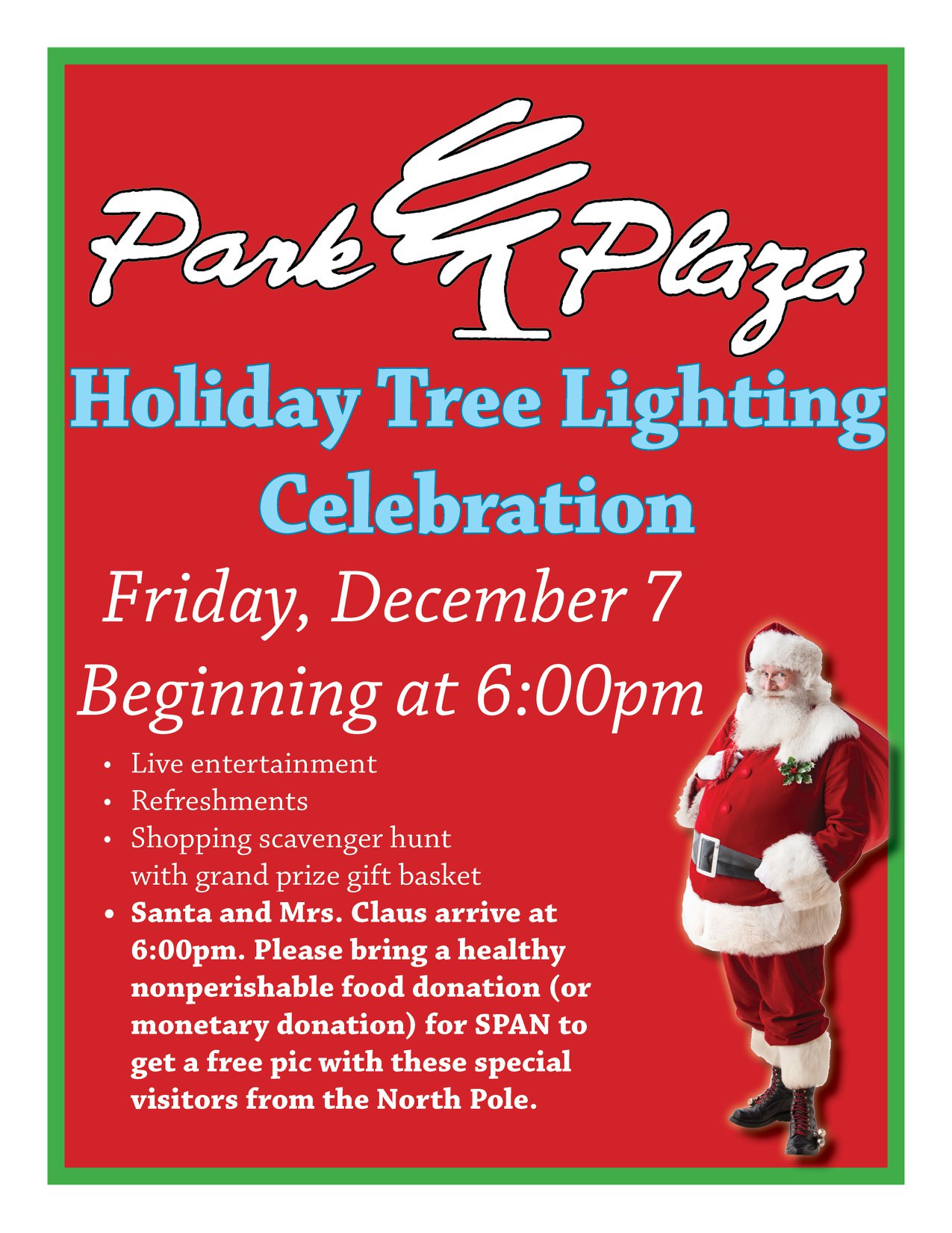 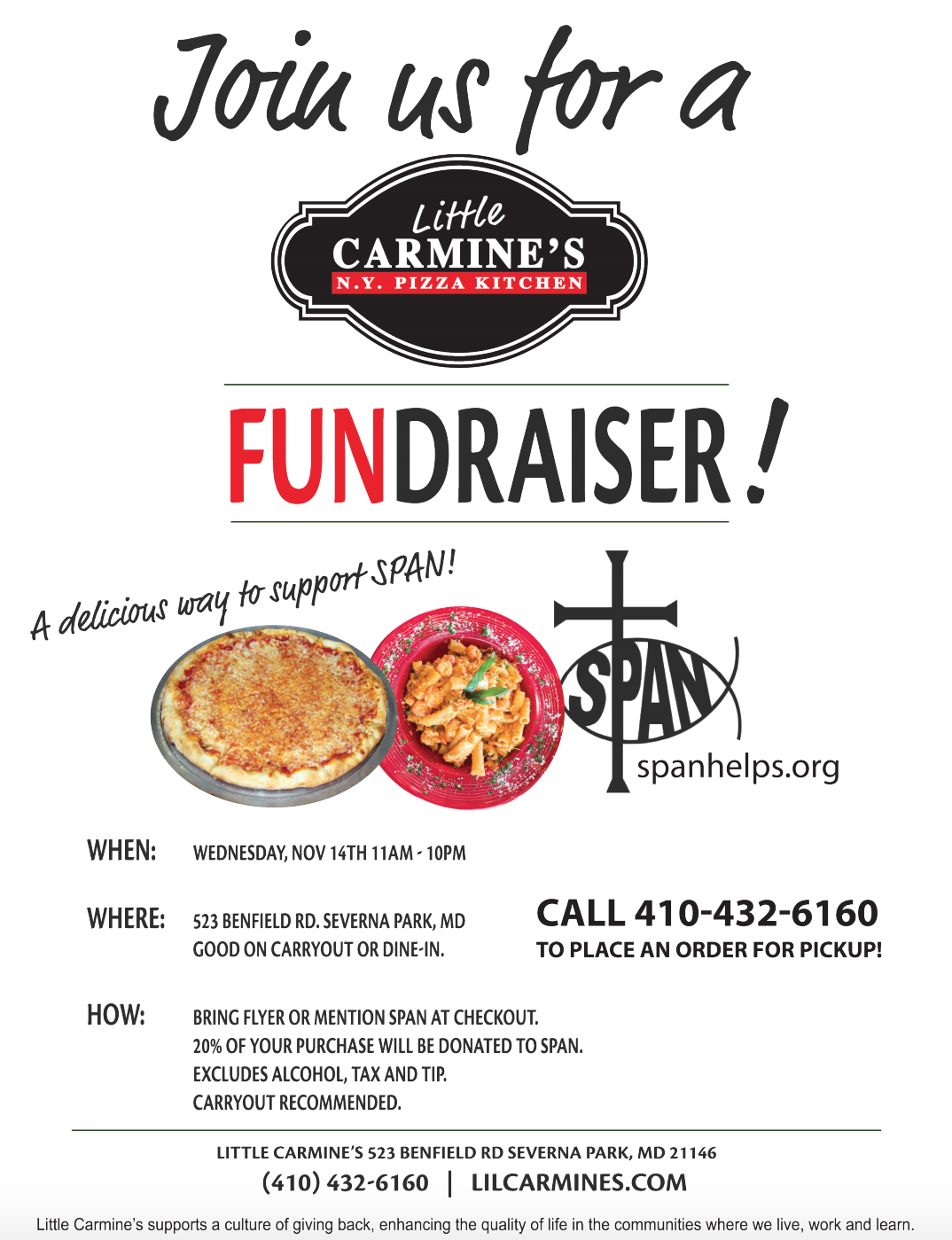 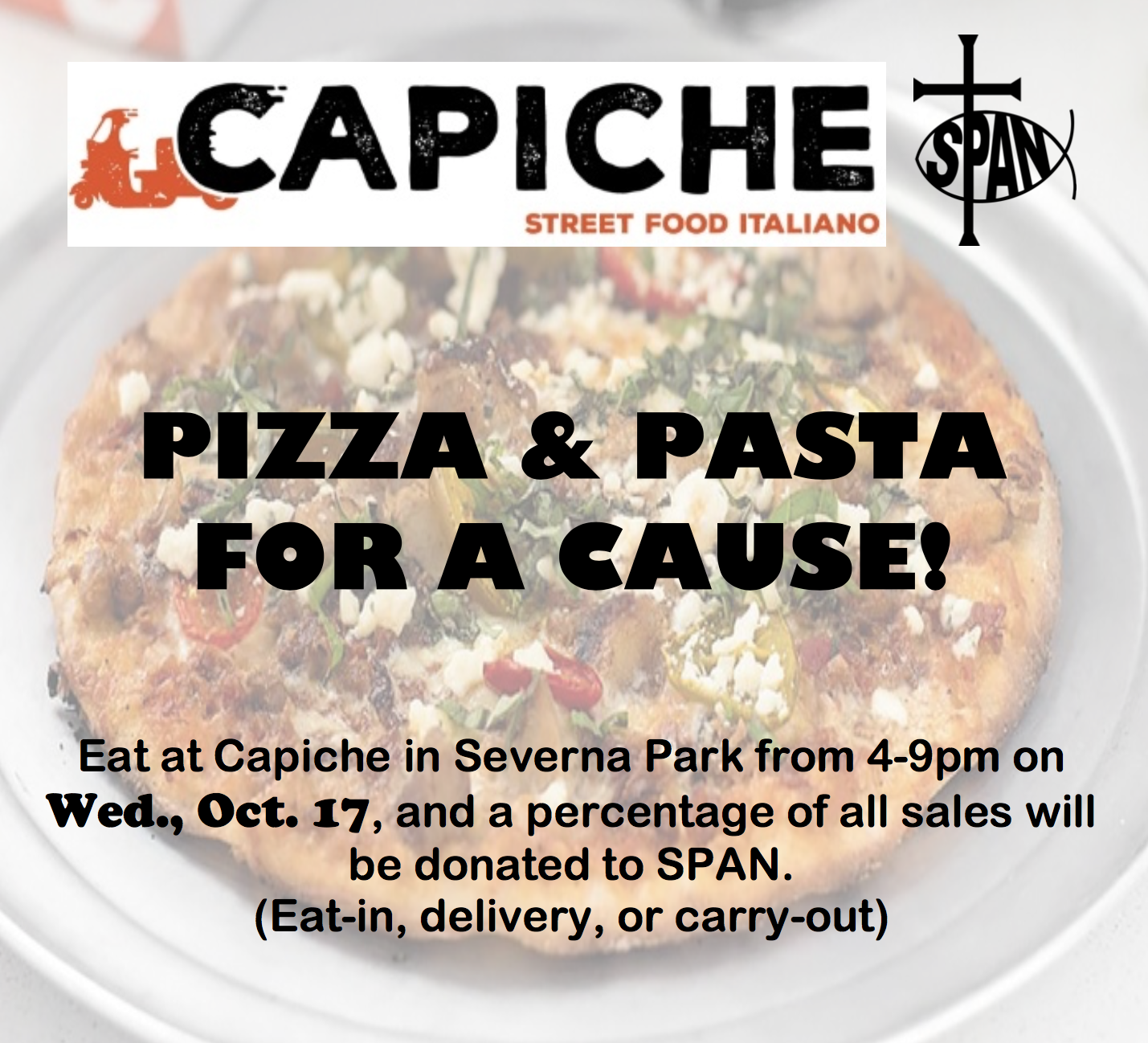 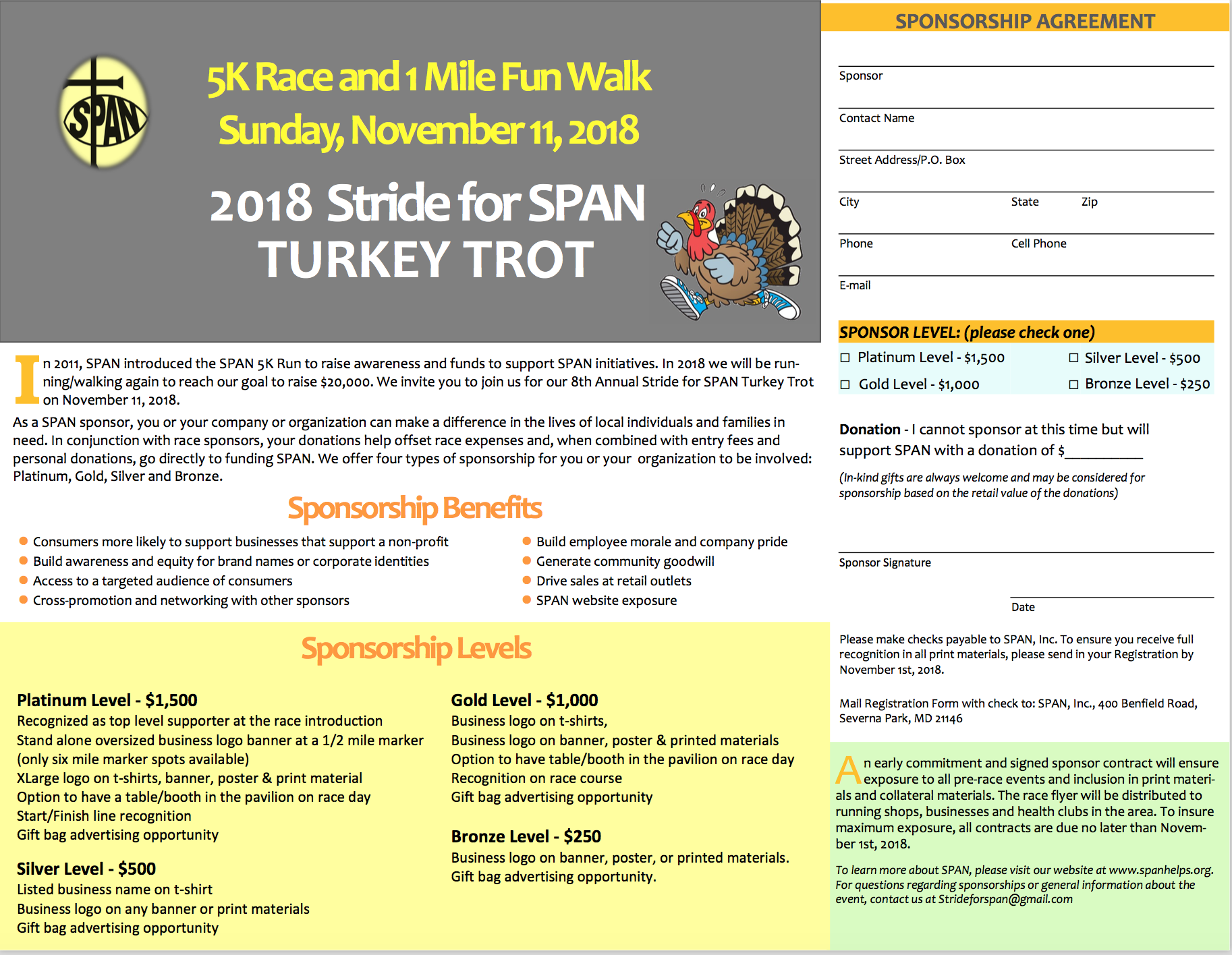 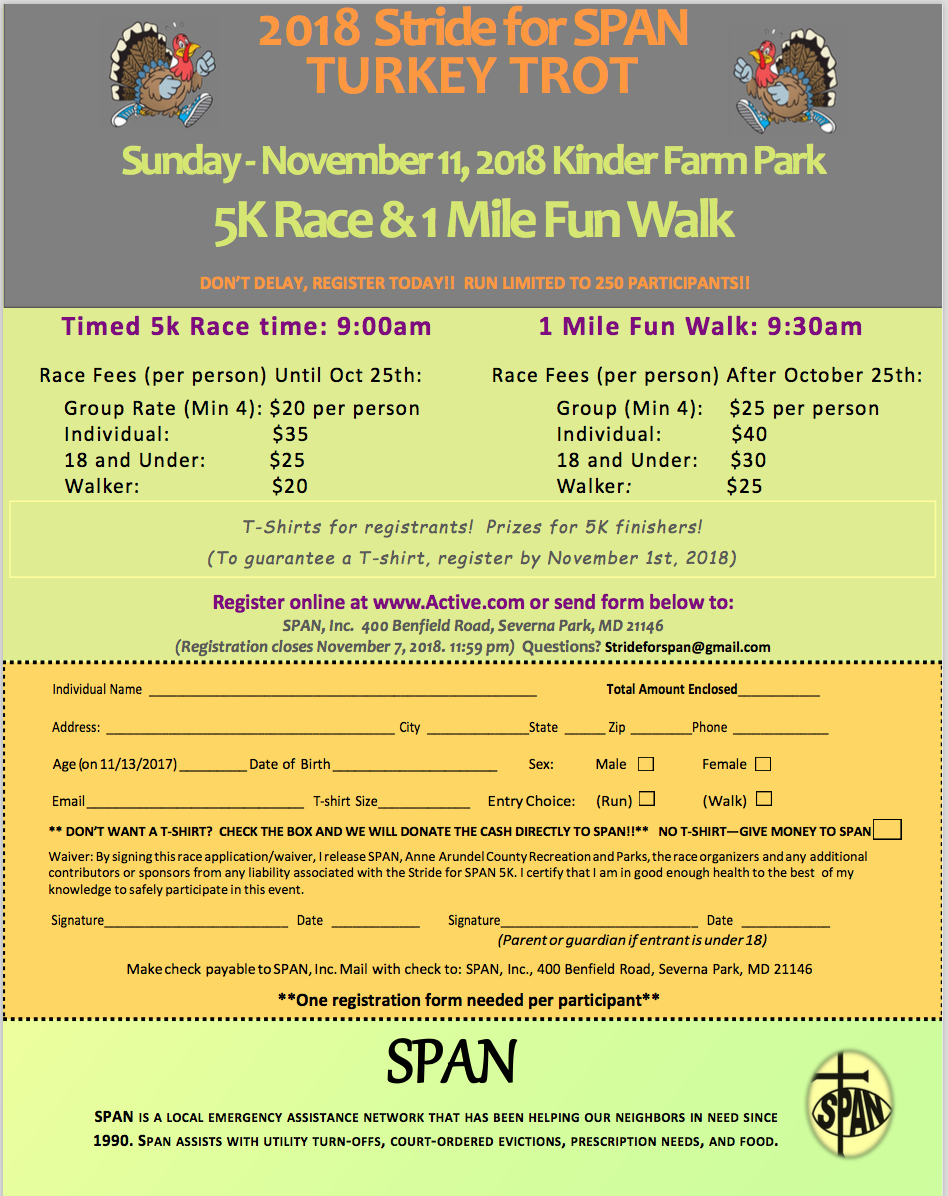 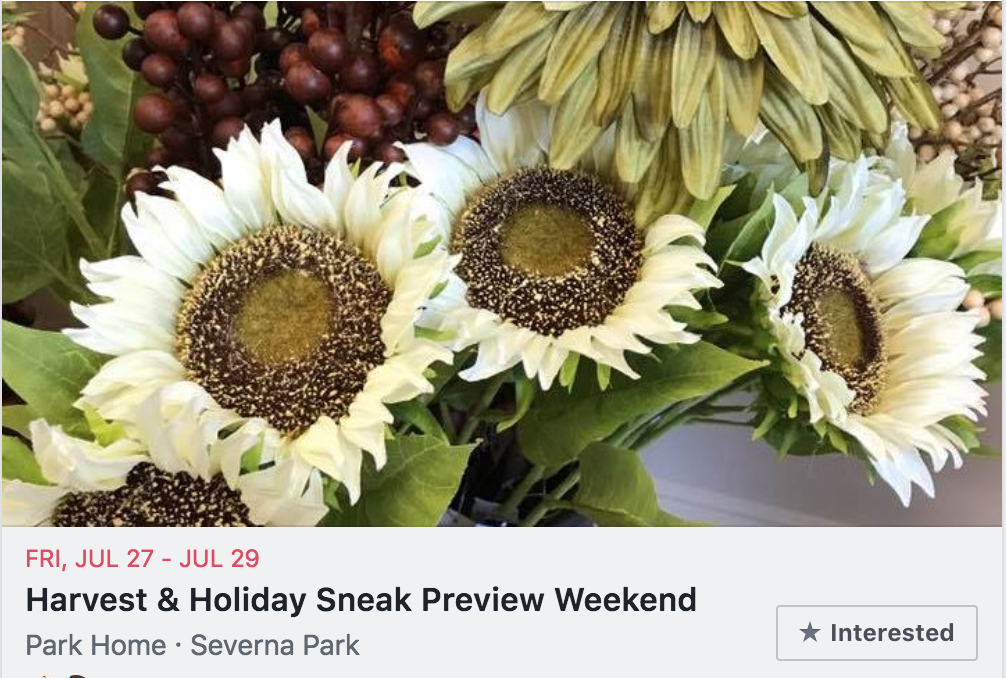 Park Home is hosting a food drive for SPAN during their Harvest & Holiday Preview Weekend July 27-29. Bring 5 nonperishable food items - or a cash donation - and receive 15% off one item. Thanks for supporting SPAN, Inc.! 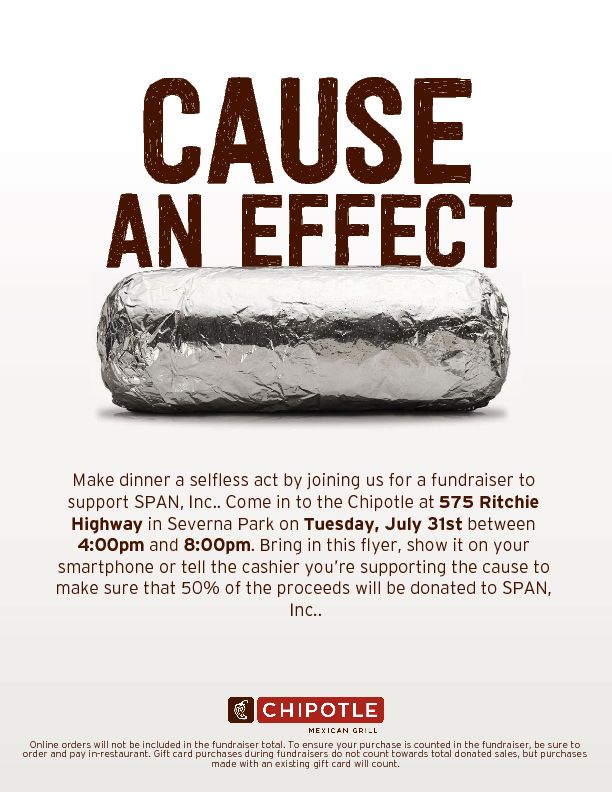 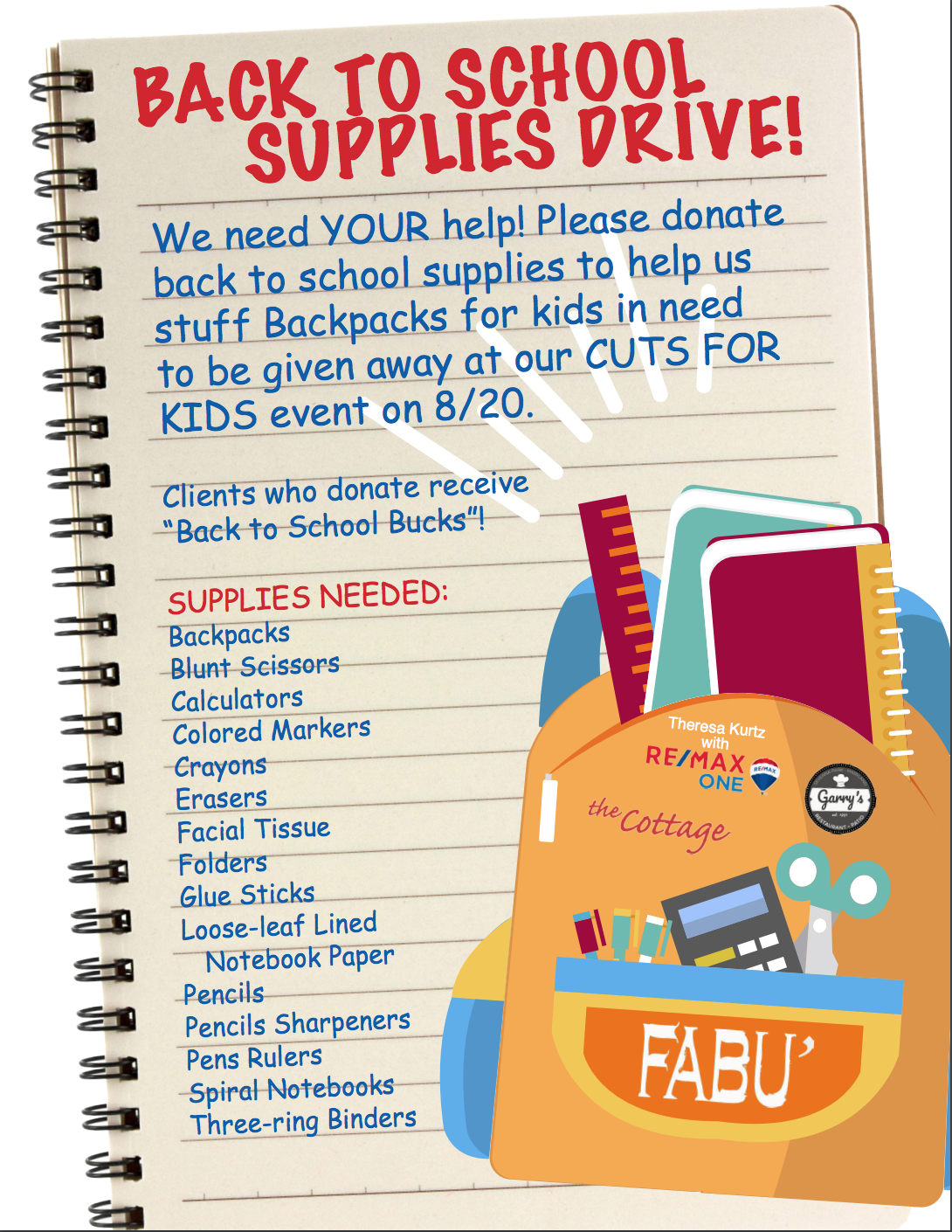 Hats off to Theresa Kurtz - Realtor at Re/Max One for organizing an amazing back-to-school event to benefit those in need in our community! Fabu' Salon & Spa will be giving free haircuts and backpacks full of school supplies to our clients on August 20. SPAN will serve as a drop-off point for school supplies. You can bring them by during our office hours (M-Th 10-2) or 24/7 in our bin behind our building. Other drop-off points are Fabu', The Cottage, and Garry's Grill.

Also, you can bring five school supply items to The Cottage on Monday, July 30, to receive 20% off one item (some exclusions apply). The Cottage will also be donating 10% of their sales on July 30 to the school supply drive. For those who drop off at Fabu' Salon, you will receive a coupon for 25% off your next retail purchase.

Thanks also to Garry's Grill & Catering for being a cash sponsor of this event!

Don't you just love it when local businesses get together for the betterment of our community! 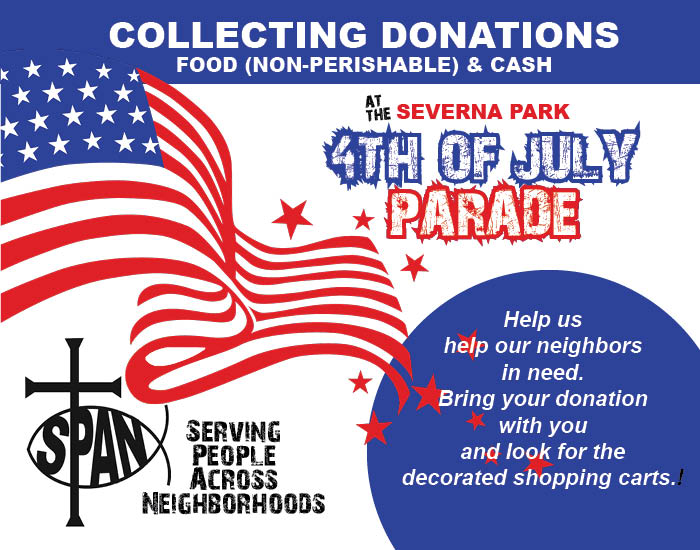 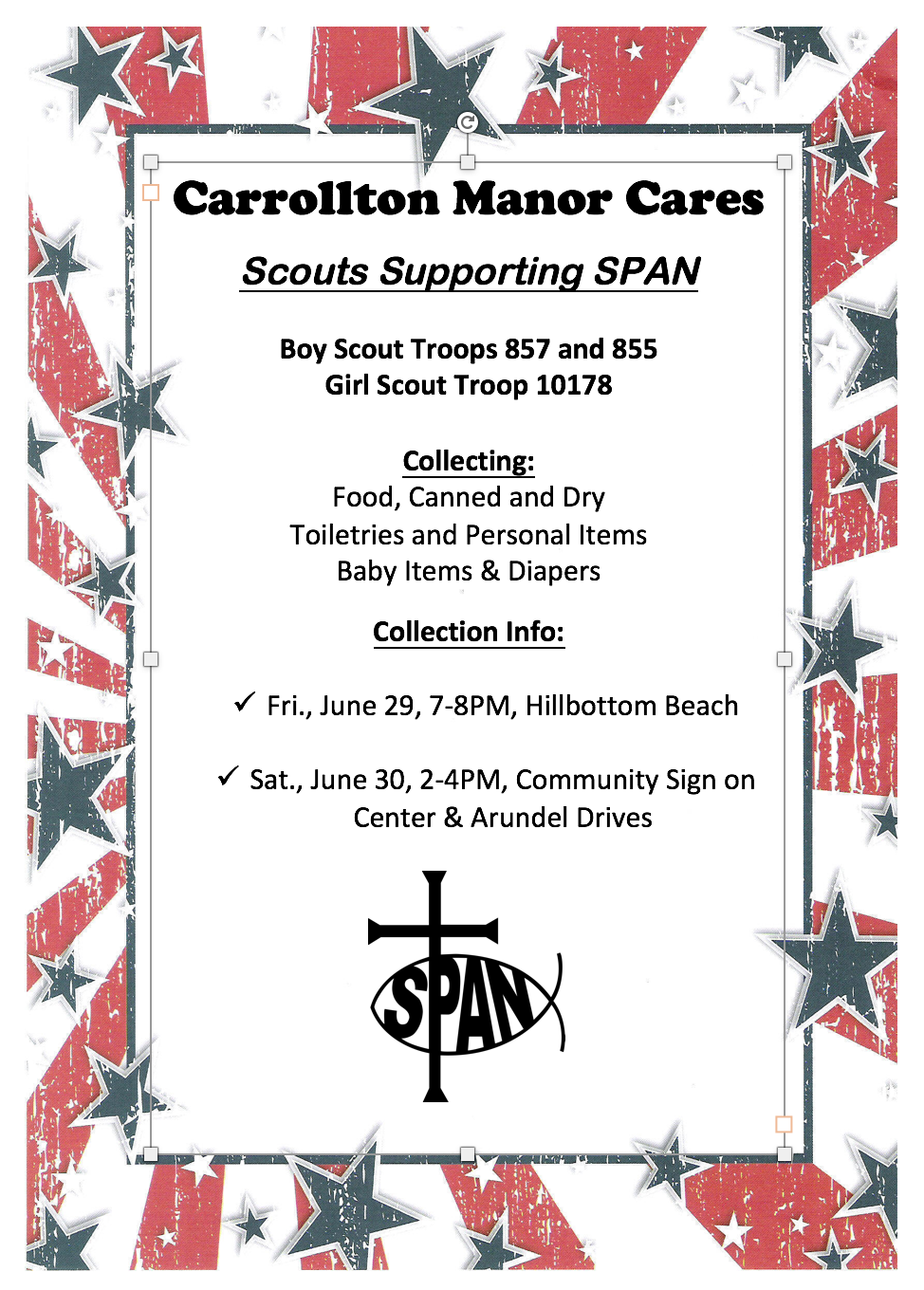 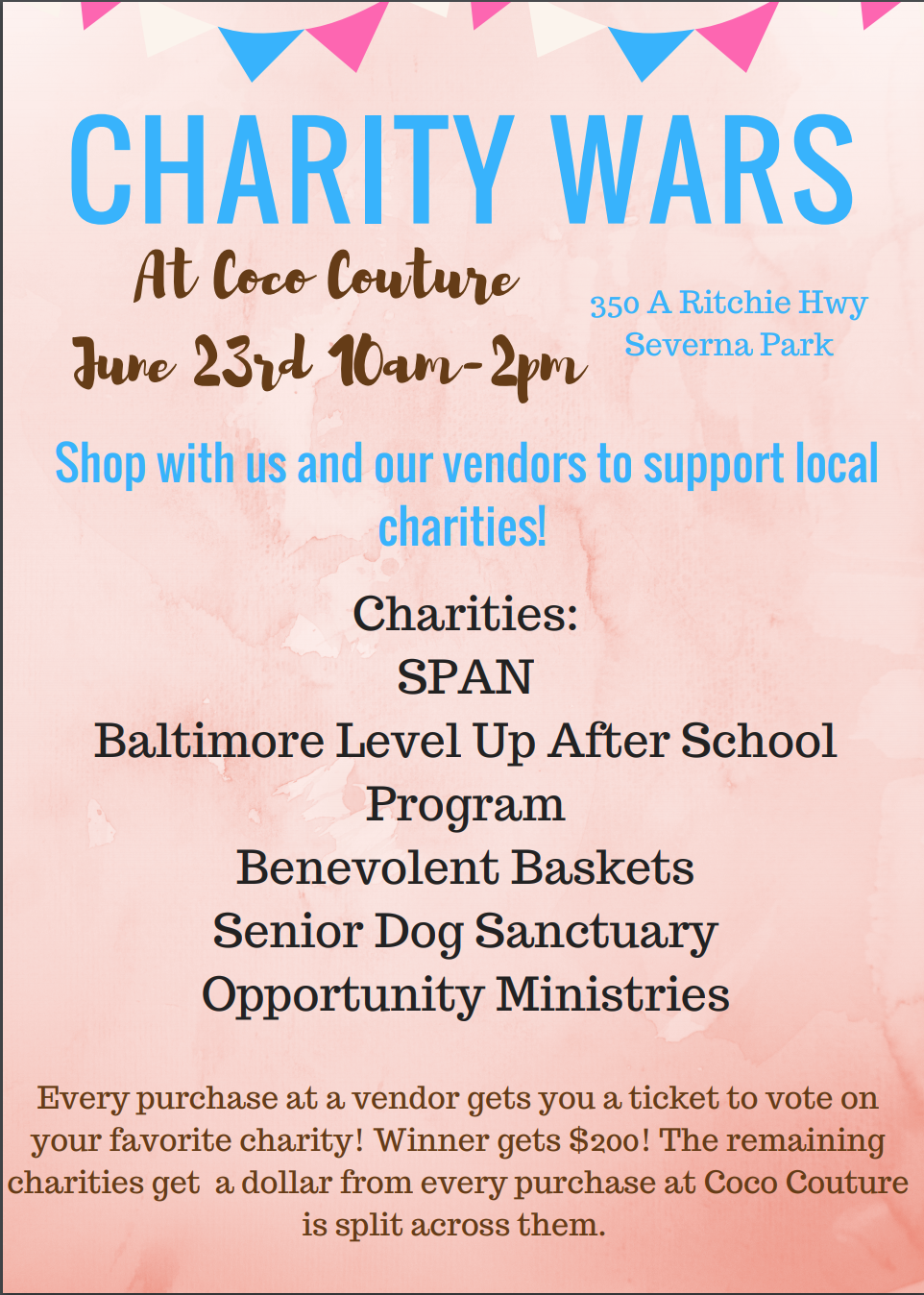 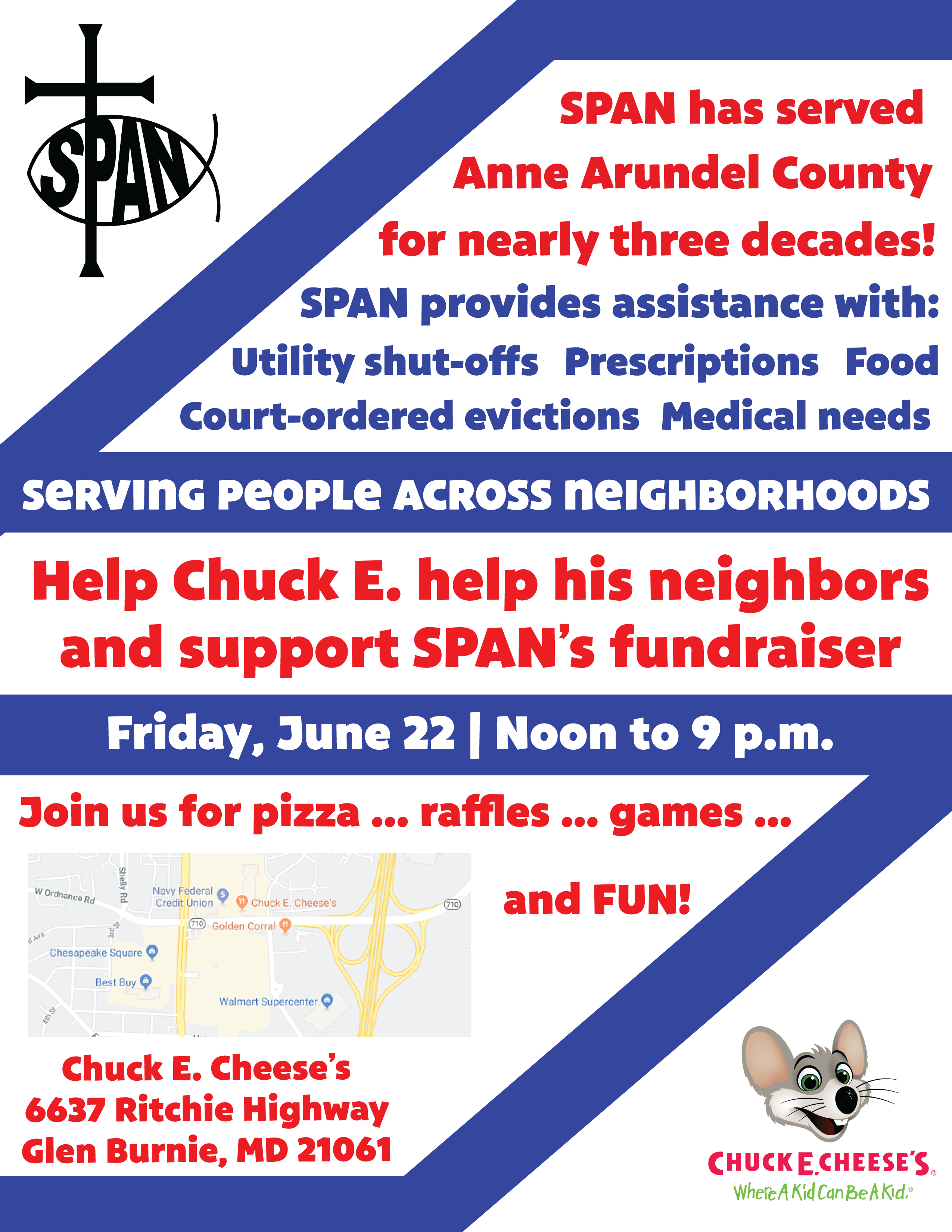 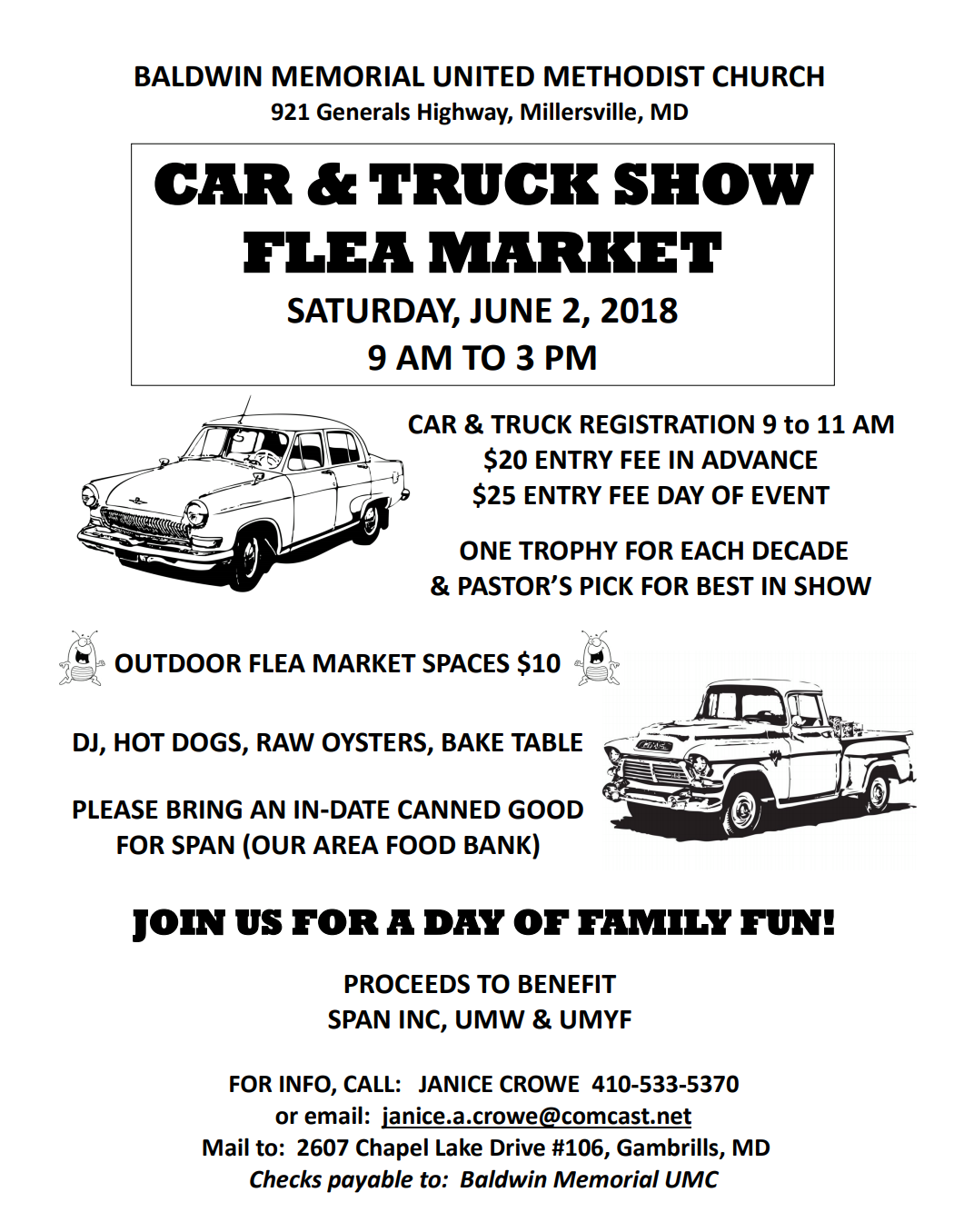 Be sure to mention SPAN so we get credit for your purchase! 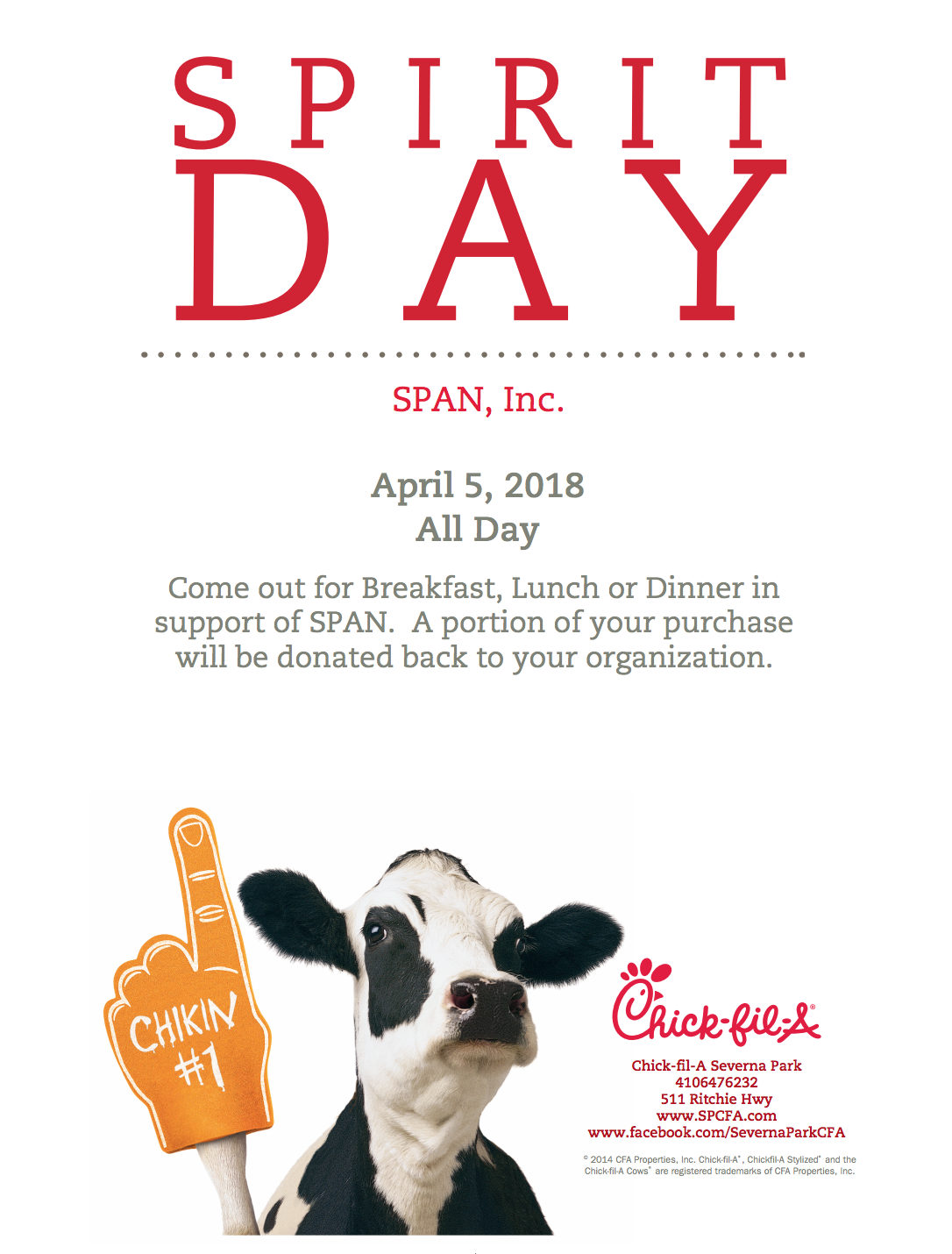 Easter is coming! This year, as always, SPAN is offering Easter dinner baskets to clients. Provided by generous donors, our clients will be able to pick up their Easter meal, along with a grocery gift card, on a first-come, first-served basis, on Tuesday, March 20, from 10:00am - 1:30pm. To donate an Easter meal, please refer to the above guidelines, and deliver to SPAN on Monday, March 19, between 10:00am and 1:30pm. For more information, please call 410-647-0889 between 10:00am and 2:00pm, Monday through Thursday. 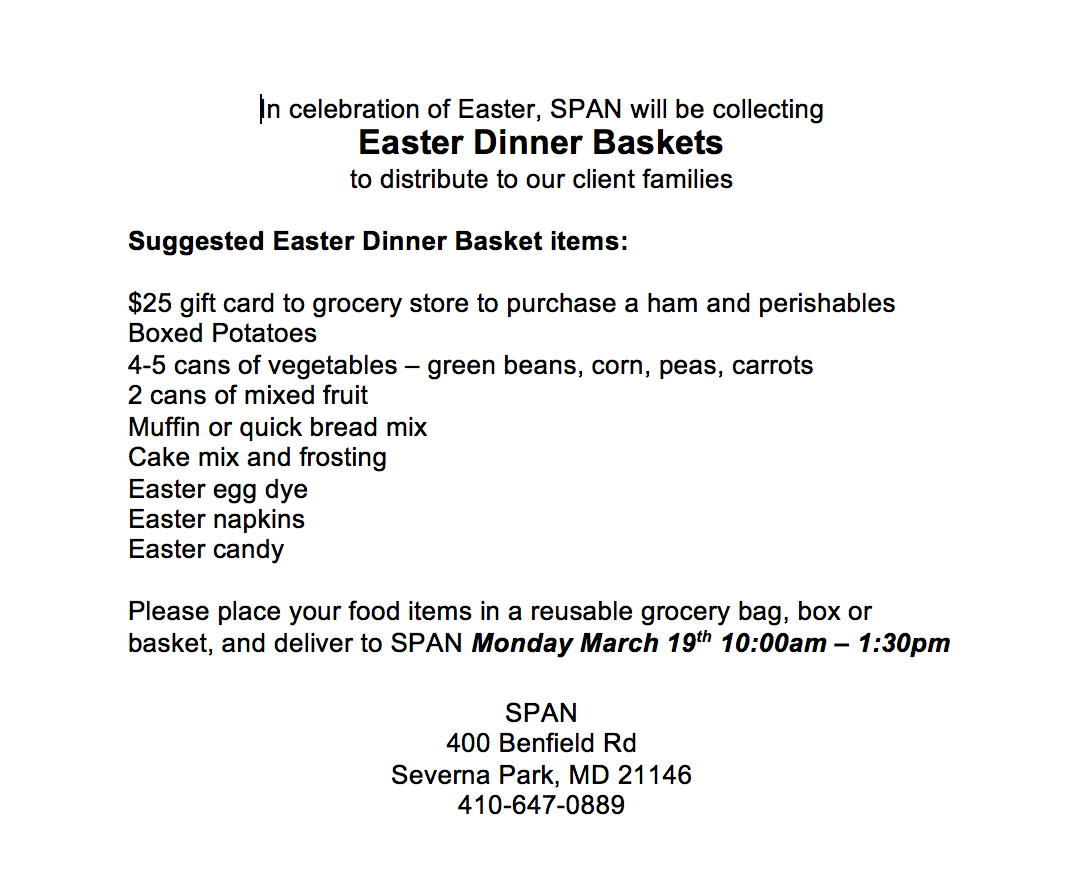